We asked local comic designer and art activist and organizer, Vicko Alvarez Vega, to break down why last night’s election was a victory against Chicago machine politics at every level.

References to machine politics and race dynamics in Chicago aren’t super common in other cities so very briefly here’s a summary of how much this election shook the city.

1. Two Black women are going into a mayoral runoff beating out an incredibly wealthy white family dynasty. Wikipedia “Daley Chicago” and you’ll better understand the roots of the corruption and violence that mainstream media likes to turn into a spectacle. 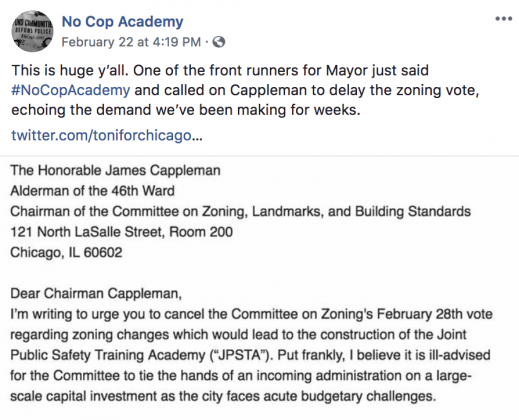 2. Radical grassroots campaigns #EraseTheGangDatabase and #NoCopAcademy took a front seat at mayoral debates. This is NUTS considering in the last mayoral race, our progressive darling Chuy couldn’t muster up the courage to not advocate for a thousand more cops. Mayoral candidates got pushed against a wall and forced to take a stance on eliminating a corrupt database and not feeding the beast that is CPD.

3. Housing and abusive development in the city was a HUGE topic. Hats off to every level of activism and organizing across the city that’s led to voters thinking critically about incumbents’ ties to real estate developers. Gentrification can look damn near hopeless and has all of us beefing with each other so any ray of hope for preserving the hood is more than welcome.

4. Tried and true organizers either won their aldermanic (ie council people) seat or are going into historic runoffs with VERY good but VERY close chances of winning. Maria Hadden for 49th Ward Alderwoman beat out an old machine goon, Jeanette B. Taylor Candidate for 20th Ward, Byron Sigcho Lopez for 25th Ward Alderman and Rossana for 33rd Ward Alderman have a good chance of taking it home.

5. Let’s just talk about Maria Hadden one more time. An openly queer Black woman, a south sider with the guts to take on Rahm, UofC, and Obama, an Ecuadorian immigrant and a Boricua mujer backed by Democratic Socialists of America. Y’all, revel in this shit. Our lone radical socialist wolf Carlos Daniel Rosa is not so lonely anymore. This matters for obvious reasons but I’ll go ahead and mention that it matters because he won’t be seen as such an easy target by other aldermen. And when I say “target” some of the shit flung at him has been way too real and I’d like to think people will think twice with Hadden and hopefully others in City Hall.

6. It’s worth also mentioning that Rafa Yañez for 15th Ward Alderman is heading to a runoff. Rafa is a former police officer who’s actually been critical of the force and is challenging a good for nothing Latino Rahm loyalist. FTP I know but again, the fact that we have so much discourse around the legitimacy of CPD ingrained in elections is wild. (Editor’s note: And he’s going after Raymond Lopez, a Latino alderman that has made the center of his career to increase policing and criminalization of Latinx and Black communities, going as far as saying that gang violence will not be over until parents learn to turn over their children to the police. Shout out here to the #FueraLopez campaign, which created that image posted above).

This is just what I’ve kept up with. I’m not in the thick of it so feel free to argue with me in the comments (I won’t respond lol) or add on. From the outside lookin in I know people mostly just know this city is corrupt, we got expensive ass art for white people, and it gets too damn cold. So I guess I mostly wanted to share a summary so y’all could see what Chicagoans are capable of when we show how much we care for the city and one another.

There’s a hell of ways to go but just let yourself sit in it for a minute before you pop open the next excel sheet. Love y’all

Vicko Alvarez Vega is the author behind the ScholaR Comics and zine series featuring Rosita. She’s a  comic artist, educator, organizer, and some times political commentator. She is a native Tejana that has called Chicago home for 12 years. Her latest zine, “Rosita Gets Scared,” recounts Rosita coming to terms with her fear of deportation. The comic also serves as an activity book to be utilized in classrooms and with youth groups as a tool to encourage culturally relevant social and emotional learning.