In 2020, Mijente PAC made history alongside GLAHR Action Network (GAN) by knocking on every Latinx voter door in Georgia for the Senate runoff election. This year, GAN was back on the doors.

The Georgia Latino Alliance for Human Rights (GLAHR) was founded in 2001 to educate and organize a base of Latino immigrants to defend and advance their rights. In 2017, GLAHR developed their political operation through GLAHR Action Network (GAN) to have the ability to engage in political campaigns. From there they decided to flex their Mijente membership and through the Mijente PAC co-ran the first state-wide political campaign to targets Latinx voters in the state of Georgia.

Today, GLAHR and GLAHR Action Network are the largest Latino grassroots organization in Georgia with comités populares — committees located across the state designed to raise the political consciousness and develop the leadership of the Latino community. GAN’s leaders in rural and urban parts of the state, and their direct collaboration with Mijente, were a big part of how they were able to reach all Latinx voters in the 2020 Senate runoff.

Political campaigns at GLAHR and GLAHR Action Network are approached as community defense practice because it’s viewed as a way to stop harmful, anti-immigrant candidates from obtaining positions of power. Electoral campaigns are also a component of the ongoing organizing that expands beyond election cycles to advance their goals of obtaining dignity for all Latinxs in GA, building with and alongside Black communities. For them, this can look like being part of the coalition that successfully shut down the Irwin Detention Center after years of exposing the harms immigrants experienced while there, including but not limited to allegations of non-consensual sterilizations. It can also look like hosting massive community events where cultura is celebrated and political education happens.

This year, GLAHR Action network turned their focus to the Atlanta elections because they want Latinxs to become more involved in electing local representatives. Right now, a typical day at GAN begins bright and early, by 8am all canvass teams have arrived at the office for their overview of the day and their materials. They’re at their first door by 9am until the end of the day. GAN has had thousands of conversations on the doors and have found so many people who didn’t know there was an upcoming election, let alone know how local government impacts their lives. GAN aims to change this and views every conversation as an entry point to develop the engagement of Latinxs in politics at scale and as an opportunity to learn more about them.

For this election, GLAHR has focused on highlighting the issue of shutting down the Atlanta Detention Center, after years of advocating for it through marches and mobilizations. The Atlanta elections have become a potential avenue to achieve this goal because it is under the jurisdiction of the Atlanta Mayor and City Council. The elections are also an avenue to showcase the growing power of the Latinx vote. The hope is that the increased Latinx voter turnout will help candidates who’ve vowed to shut it down win. Through nonpartisan get-out-the-vote campaigns, GLAHR is letting Latinxs voters know that a way to be recognized as a force to be contented with is by showing up at the polls.

At the doors, GLAHR and GLAHR Action network continue to confirm what they’ve learned after years of organizing in the state — the Latinx community is hungry for information and engagement. They want to learn about the candidates, polling locations, and the role of local government in their lives. They want to know how to end the criminalization of immigrants and how to close jails. They want solutions for people experiencing homelessness and rehabilitation centers in their community. At the end of many of these conversations, Latinx voters will commit to vote and ask to be plugged in.

As the results from the latest election are coming in, Kimberly Bollo Aponte, Organizer at GLAHR reminds us:

“Latinxs have been an untapped potential in Georgia, but they’ve awakened and they won’t stay on the side lines anymore.” 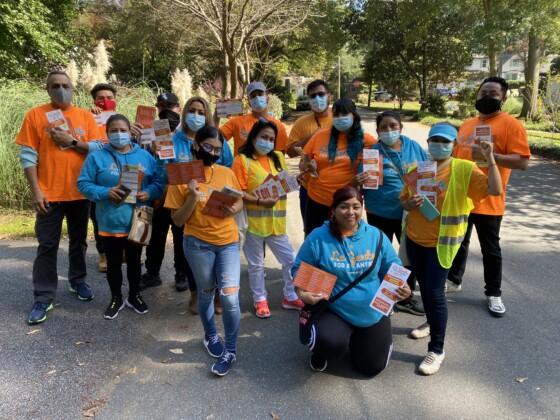